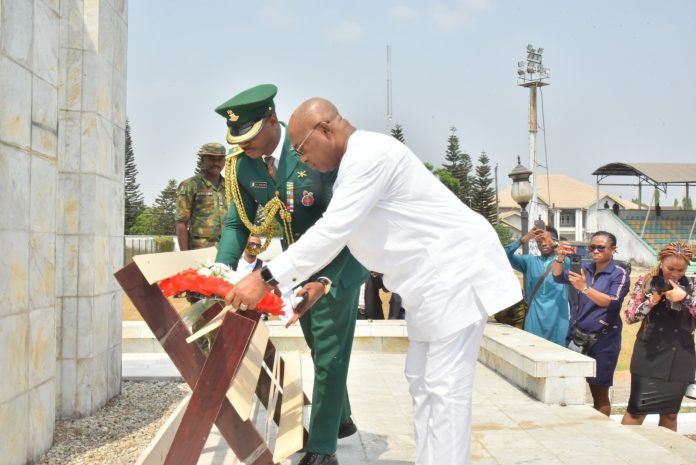 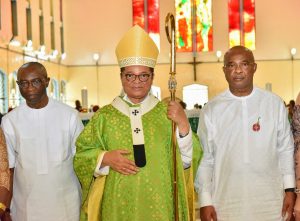 Governor Hope Uzodimma of Imo State has made a case for the establishment of a body that will carter to the needs of fallen heroes of Nigeria.

He said that the setting up of a body like National Armed Forces Dedicated Fund (NAFDFUND) in the fashion of TETFUND will go a long way in dealing with cases relating to the welfare of families of officers and soldiers who lost their lives in the cause of national assignment.

Speaking on Sunday at the Rear Admiral Ndubuisi Kanu Square, Owerri where this year’s Armed Forces Remembrance Day was commemorated, Governor Uzodimma said NAFDFUND should be funded by the federal, state and local governments like the TETFUND.

He said the whole essence of the NAFDFUND is to ensure that the Veterans and the families of the fallen heroes are carted for without ceasing and for all seasons after the TETFUND model.

“When modeled after the TETFUND, it will provide a pool of resources where the State and Federal Government can deep hands and take care of the education of the children of fallen heroes as well as the veterans believing that the idea will motivate the security personnel to put in their best in addition to making more Nigerians to join the Armed Forces.”

The Governor who acknowledged the importance of the Armed Forces Remembrance Day given the supreme price the veterans played in securing the country, noted that it should not be reduced to a routine, but an event where both the government and the private sector ought to be partners to make the day more memorable.

“The celebration is in appreciation of the supreme sacrifices of rare breed of Nigerians who laboured to secure our country and in the course of doing that some of them lost their lives while some were maimed, l” he said adding that, “To appreciate them they deserve our respect, attention and resources, not mere platitudes but support and prayers.”
For Imo State in particular, the Governor appreciated the invaluable contributions of the Armed Forces towards the restoration of peace .
He emphasized that his government has not abandoned the families of those who lost their lives in the process of securing Imo State and that “the government will continue to support the security agencies as much as possible and strive to make their jobs easier.”
Reiterating the need to express gratitude to the fallen heroes, the Governor said “many of them lost their lives trying to secure us; in other words “FOR OUR TOMORROW, THEY GAVE THEIR TODAY,” noting, “though there is not much we can do for the dead but there is much we can do for our Veterans.”
Concluding, the governor singled out the President Muhammadu Buhari, commending him for his “statesmanship, tolerance, patience, perseverance, achievements, and contributions towards National development,” as well as “the way he has handled the challenges occasioned by the temptations of the insecurity in the country,” and prayed God to give him the opportunity and strength to make a successful succession and conduct free, fair and credible election in this 2023.
As the Governor of Imo State, he told the audience that he owes it a “duty to ensure that the security and unity of our Nation for which the heroes led down their lives is preserved,” adding that, “Only then we can honestly say that the labours of our heroes past shall never be in vain.”
Earlier at a Church Service at Maria Assumpta Cathedral Catholic Church Owerri to mark the 2023 Armed Forces Remembrance Day and the Third Anniversary of the Governor’s swearing-in, he commended the efforts of the Armed Forces in Nigeria in securing Imo State from the nefarious activities of bandits and criminals and especially for working hard to ensure that the politically-contrived insecurity in Imo is tamed and peace restored, the reason the celebration could hold.
He promised to continue to support them and make their work easier while urging the Church to pray for Nigeria, the State and the Armed Forces “so that we continue to exist together as a people in unity and peace as one people.”
In his Homily, the Archbishop of the Owerri Catholic Archdiocese, Most Rev. Lucius Iwejuru Ugorji said “the Armed Forces Remembrance Day should be used to consider all the service members who have lost their lives in the honourable call to duty to defend their fatherland,” noting that “it is not simply a remembrance day but a daily battle.”
He added: “We should take time to consider the families and relations of the veterans and the heroes. It is time to consider that for them every day is a remembrance day hence we should feel their endless pains and irreparable loses.”
The Archbishop called for support to them to live decent lives and urged each and everyone to donate generously to support the family members and dependants of the fallen heroes “as the minimum honour to be paid to soldiers who hazards their lives to defend the Nation.”
He also prayed God to grant eternal rest to our fallen heroes that they may sleep in the peace of Christ and rise in his glory.
Those present at the Armed Forces Remembrance Day celebration were all Service Chiefs and Heads of Paramilitary agencies, members of the State and National Assembly, Members of the State Executive Council, Veterans, wives of fallen heroes and relations.

I Would Dialogue With Agitators Everywhere If Elected, Says Obi