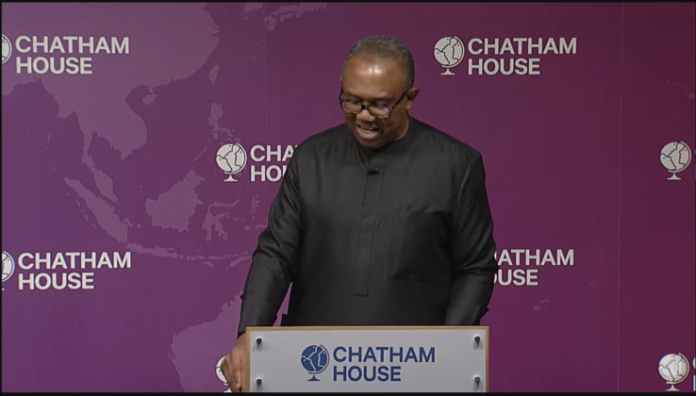 In what appears to be a stellar speech at the Chatham House, London, the Labour Party (LP) Presidential Candidate, Mr Peter Obi, declared that the Nigerian Presidency under him and Yusuf Datti Baba-Ahmed in charge will dismantle inefficiency and eliminate transactional policies that breed corruption in government.

Obi who made the declaration as a guest at the Chatham House, the famous British international Policy institute, on Monday, also took over 15 questions from the audience after his elucidating paper on various sectors, saying they will dismantle the structure of criminality which they have been using to hold the country down.

Stating that “there will be no sacred cow” under the Obi-Datti administration, the Labour Party Presidential candidate said that “our objective is to dismantle these structures of criminality and enthrone competence, character, and capability so that talents and ideas can flourish.”

On how he intends to cope with possibly having a National Assembly that may be dominated by other parties, Obi said he went through such experience as Governor of Anambra state when none of the 30 members of the State of Assembly came from his political party, adding that what he needed to navigate such case is to do the right thing, avoid nepotism and transactional policies, because even the parliamentarians desire good governance.

Responding to question on the Indigenous Peoples of Biafra (IPOB) and why he has not condemned them, Obi said that for him and many other reasonable Nigerians including Igbos, the Biafra war ended 53 years ago. But he is not oblivious of the agitators’ demands for justice.
According to him, “we are going to look into the issue of justice and marginalization which some of them are hinging their grievances.

“We are going to apply the carrot and stick in dealing with the agitators. But in the end there can only be one government and we will be in charge.”

On the how to attract investors to Nigeria which was asked by a former British High Commissioner to Nigeria, Paul Arkwright, Obi likened what he intends to do to attract investors to bee and honey, he will create enabling environment where rule of law thrives and will avoid any transactional policies which breeds corruption and weakens governance.

On security, he said it will be his top priority because everything will be done to secure the environment and he will do this by first turning the country into production and pulling people out of poverty and adequately utilising our military.

Obi noted: “Our military once secured Africa and they should secure Nigeria and we will provide the needed leadership and political will.”

He also answered questions on the independence of the Central Bank of Nigeria (CBN), saying that what is happening in the apex bank now is a consequence of mix up of responsibilities and not necessarily of competence, a situation he assured his regime will correct by ensuring that square pegs are in square holes both in personnel and policies.

Obi also said that the on-going fiscal rascality in the system will be dismantled and order and discipline injected into the country’s monetary policies.

On how to navigate the so called ‘big boys’ to be able see through his beautiful policies if elected, the LP standard bearer said the challenge will be surmounted as there will be no sacred cow.

The former Anambra state Governor also provided convincing answers to questions on education, Health, debt servicing among others to win the consistent applause from the audience.

Obi gave indication of his preparedness for the program when he was offered seat by the moderator of the program and he respectfully rejected it saying the problem in Nigeria his country is so serious not for sitting down and he stood all through the nearly two hours program.

Apprehension Escalates Over Use Of Afghanistan For Sheltering, Training, Financing Terrorism

Customs To Be Fair In Recruitment Of Niger Delta Ex-Agitators