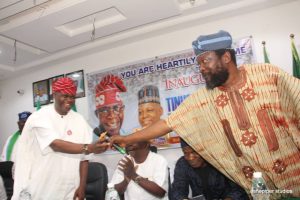 The State Coordinator of the Tinubu/Shettima Grassroots Independent Campaign Council, Ekiti State Chapter, Prince Akintade Olayisade has said that despite the wide acceptability of the All Progressives Congress Party (APC) and the prodigious capacity of its Presidential candidate, Asiwaju Bola Ahmed, they would not take anything for granted.

Prince Olayisade made this known in his address during the inauguration of the Executive and Committee members of the Council, held at the Secretariat of Tinubu/Shettima Grassroots Independent Campaign Council, Ado-Ekiti, the State capital.

According to the State Coordinator, “Our motto will be WORK and PRAY and our campaign code name will be OPERATION SATURATION, which he said in this context connotes overload concentration and superabundance of information about our party/candidate and robust rebuttal and response to any criticism of our candidate and party to the electorate”.

Speaking on the responsibilities ahead of the members of the Council in Ekiti, Prince Olayisade explained that it’s a continuation of what they have started and that they are going to intensify efforts to all the books and crannies of Ekiti State to ensure that Tinubu/Shettima emerge as President and Vice President of the Federal Republic of Nigeria. Adding that GICC is going to work harmoniously with the support groups and committees in making sure that they deliver their mandate.

The Senator, representing Ekiti Central Senatorial District and candidate of the All Progressives Congress (APC) in the forthcoming National Assembly in Ekiti State, Senator Michael Bamidele (MOB), while addressing journalists said the significance of the inauguration of Tinubu/Shettima Grassroots Independent Campaign Council, was that Ekiti is keying into what the rest of the 35 states of Nigeria including the Federal Capital Territory are doing to inaugurate a platform to run a Door To Door Campaign for Asiwaju.

“We have two major organs of this campaign, one is the Presidential Campaign Council (PCC) at the National and State level which is in charge of organizing the rallies and coordinating the campaigns.

“The other organ is the Tinubu/Shettima Grassroots Independent Campaign Council, which is saddled with the responsibility of ensuring door-to-door campaigns That’s what has just been Inaugurated in Ekiti and my hope and prayer are that everybody will take advantage of the platform take the message of Athe siwaju Presidency to every nook and cranny of the State.

“Going by what is happening in the streets of Nigeria, going by the nature of the popular and scientific campaign, the Asiwaju campaign outfit is running, going by antecedents of all the frontline candidates and then situating Asiwaju in this campaign and in the February, 25th election is the Presidential candidate to beat. I am also convinced that Asiwaju is the kind of solution that Nigeria needs at this time among all the candidates that are contesting. He is not promising anything that he has not done before”. Said MOB.

In his remark, the National Deputy Coordinator (South), Mr. Akinola Awodeyi, equally buttressed the stand of both Olayisade and Bamidele on the purpose of GICC which he too said was to have Asiwaju Bola Ahmed as the President of Nigeria.

He charged the people of Ekiti State and all Nigerians to go and collect their Permanent Voter Card (PVC) which he said is sacrosanct as they cannot vote without having it.

The Governor of Ekiti State, His Excellency, Mr. Biodun Abayomi Oyebanji ably represented by the Special Adviser on Political Matters, High Chief Jide Awe, said the Presidential election is very important to Ekiti people as he said “, not only because we are from the southern part of the country but because of what Asiwaju means to Ekiti State right from 1999 till date. Adding that to whom much is given, much is expected. The Governor said.

He also implored all members of GICC to know that they are operating under a political party called APC and that they should not do anything that could tarnish the image of the party in the course of carrying out their responsibilities. Saying that they should play according to the dictates of the party so that at the end of the day, they would have a bountiful harvest. Oyebanji advised.
The event was well attended by the party leaders, candidates contesting for the State House of Assembly, and members of both PCC and GICC in Ekiti State.

Floods: Diri Commends Donors, Promises Transparency In Use Of Funds

Woman On Lesser Hajj Excretes 80 Pellets Of Cocaine At Abuja...

Orji Kalu Dragged To Bauchi  Court Over His Inability To Declare...