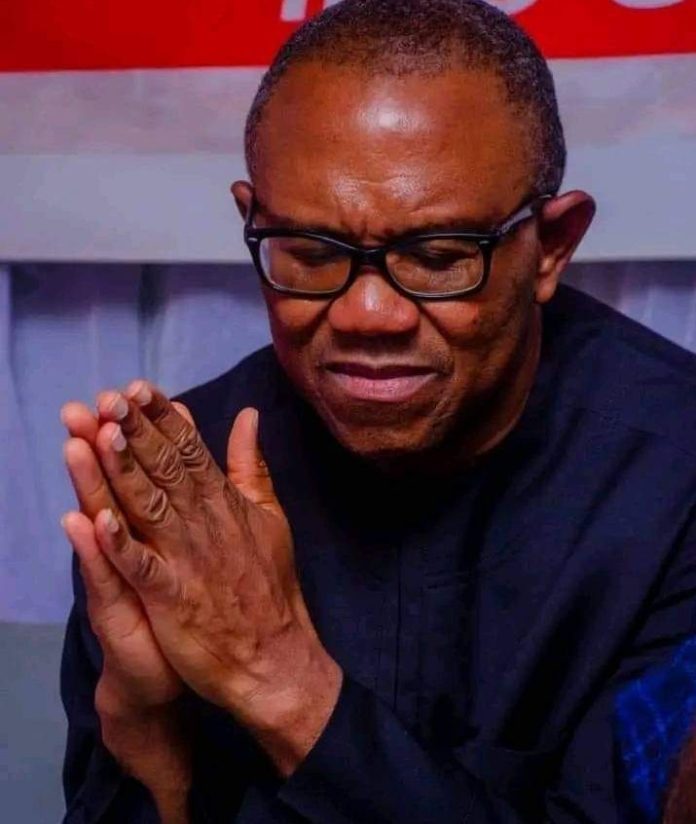 Charles Ifeanyi Obi, a chieftain of the Labour Party in Anambra state and media aide to Sen. Victor Umeh has said that Labour Party is still under attack in the state as evident in the dismantling and destruction of campaign bill boards and posters belonging to the party.

Obi said, ” It is obvious that the APGA led Government of Anambra State is determined to undermine the influence of the Labour Party and its candidates especially the Presidential Candidate, Mr. Peter Obi and the Party’s Senatorial Candidate in Anambra Central, Senator Victor Umeh.

While we try to contend the continued verbal attacks and harsh criticisms as well as the media onslaught by “data boys,” the ongoing destruction of campaign billboards, airboards and posters belonging to the Labour Party Candidates calls for more concern and urgent intervention of Ndị- Anambra.

Agents of the State Government under the watchful eyes of Governor Chukwuma Soludo are going round removing Labour Party /Peter Obi /Victor Umeh’s campaign billboards, posters and airboards while replacing them with APGA campaign materials with inscriptions that read: “Anambra is APGA Land” or “Vote APGA All The Way” or “APGA Bụ Nke Anyị”

Governor Charles Soludo has contested elections in Anambra State and no body humiliated him in the manner he is treating the Labour Party Presidential Candidate and other candidates of the Party in the state under his watch as Governor.

One thing very remarkable is that while removing campaign materials of Mr Peter Obi /Labour Party in the State, the PDP Presidential Candidate, Atiku Abubakar, and Uche Ekwunife have their campaign billboards, airboards, and posters littered everywhere and no one seems to be disturbed.

Of all the excuses the State Government has released as reasons for dismantling Labour Party /Peter Obi’s campaign materials in the state, the last they maintain is non-payment of campaign fees. However, the Labour Party has insisted they made every lawful payment and obtained every necessary clearance with receipts issued.

What is undeniable and inexcusable is that the APGA-led Anambra State Government is deliberately trying to stifle the influence of the Labour Party/ Mr. Peter Obi /Senator Victor Umeh in Anambra with a major intention to clamp down on the OBIdient Movement solidarity for Mr. Peter Obi in Anambra State.

I, therefore call on Anambra Stakeholders, Religious Leaders, Traditional Rulers, Ohanaeze Ndigbo, Women, and Youth Organizations to quit the silence and rise to the occasion.

It is embarrassing to note that while Mr. Peter Obi and the Labour Party receive overwhelming solidarity across all states of the country and the FCT, his home-state Governor, Soludo and APGA are allegedly in romance with PDP, Atiku/Okowa and Uche Ekwunife in a bid to stop him. ”

Reacting to this development, the Press Secretary to Governor Charles Chukwuma Soludo, Mr. Christian Aburime told our correspondent that it was not true that the Anambra State Government dismantled campaign materials belonging to Labour Party.

Aburime told our correspondent that the government of Professor Charles Chukwuma Soludo has given a level playing field for all political parties and their candidates to carry out their campaigns and electioneering activities peacefully and without acrimony.

He stated that the Labour Party is indebted to the Anambra State Government: that the party must pay for her election materials and must show evidence of payment before her campaign materials would be erected across the state.

The Press Secretary said, ” The point is that it is only the Labour Party that is crying foul. APC, PDP, and other political parties are not. Labour Party failed to pay the statutory bill for billboards and the signage agency came and removed their billboards. It has nothing to do with the Governor.

So if Labour Party wants their billboards to be erected again, they should go and pay for them. And if they have made the payment, they should bring the receipt because there is no way you will make payment to the signage agency and they will not put up your billboards. They should provide evidence of payment.

What the Labour Party is claiming is not true. They are just trying to cry foul when there is no need for that. They are yet to pay. And if they have paid, they should bring evidence of payment.

Putin In Turkey, Iran For Talks With Counterparts

The History We Didn’t Learn, The Lessons We Didn’t Take