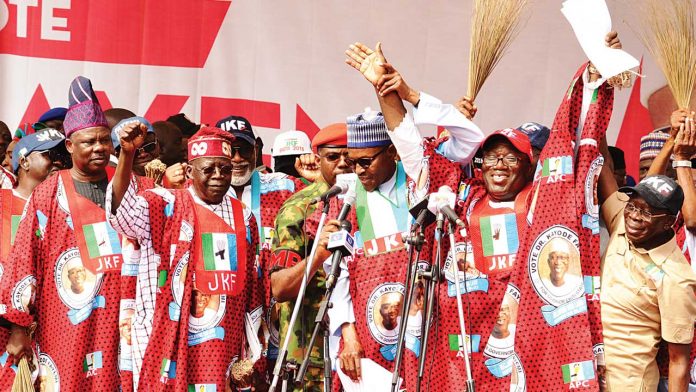 As 2023 draws nearer, the scramble for the control of the structures of the ruling All Progressives Congress has started in earnest.

When three opposition political parties, namely the All Nigeria Peoples Party, Action Congress of Nigeria and the Congress for Progressive Change, as well as a fragment of the All Progressives Grand Alliance, came together to form the All Progressives Congress, little if anything, was heard about their power-sharing agreement.

Rather, party leaders were preoccupied with pursuing the main objective-to wrest power from the then ruling Peoples Democratic Party and form a government. No sooner than the APC won the election in 2015, that the internal squabble for the control of the party structure started.

With President Muhammadu Buhari, from the CPC assuming office as President, the ACN bloc produced the first National Chairman of the party in the person of Chief John Odigie-Oyegun.

Political intrigues marked Odigie-Oyegun’s tenure. Disagreements over the handling of the “rebellion” by some party members in the National Assembly, which led to the election of Bukola Saraki and Yakubu Dogara as Senate President and Speaker of the House of Representatives respectively, consumed him. Both Saraki and Dogara, through members of the APC, were not candidates of the ruling party then.

Odigie-Oyegun’s successor, who is also a member of the APC but from the ACN bloc, was Adams Oshiomhole. His tenure ran into troubled waters quite early.

From clashes with fellow members of the National Working Committee of the party to governors and ministers, Oshiomhole was always in the news. Recalling how the party fared under him, the Director-General of the Progressives Governors Forum, Dr. Salihu Lukman, explained that Oshiomhole’s leadership style was his greatest undoing.

“Under him, might was right. The absence of meetings of organs partly contributed to most of the disaffections in the party during his tenure. Members with alternative views were considered enemies and treated as such. This attitude was alien to the progressive democracy which the APC was and is still being built upon,” said Lukman.

The crisis of confidence in the party under Oshiomhole led to a series of court cases with different members of the NWC laying claim to the chairmanship seat within a space of 48 hours.

Many members of the party heaved a sigh of relief when on June 25, 2020, President Buhari, presided over a hurriedly called National Executive Committee meeting of the party where the Oshiomhole-led NWC was dissolved.

Before then, the party was at the precipice following what then appeared to be an intractable leadership crisis. Several power blocs within the party voiced their opposition to the president’s stoic silence as the party almost descended into chaos. The president bent over backward and intervened.

In his address during the NEC meeting, which was held inside Aso Rock Buhari said, “The issues currently confronting our party at this time are such that should worry every party member.

“At the moment, our great party is faced with internal wrangling; there are ongoing litigations amongst some party members and we cannot clearly ascertain the status of certain National Working Committee members.’’

Soon after the dissolution of the NWC, the 13-member Governor Mai-Mala Buni-led Caretaker/ Extra-Ordinary National Convention Planning Committee was put together and given the mandate to reconcile aggrieved party members and organise a national convention to elect new national officers.

It’s been a little over a year now since the Buni-led CENCPC took the initiative and embarked on a membership registration and revalidation exercise to pave the way for congresses that would lead to a national convention where new members of NWC are expected to be elected. The congresses, which have since commenced, have not been without challenges.

There have been reported cases of parallel congresses in Kwara, Ogun, Osun, Lagos, Enugu states among others. Those interested in party positions at the national level are not leaving anything to chance.

“They’ve learned a thing or two from Oshiomhole’s downfall and now pay greater attention to the grassroots,” said Umaru Dantani, a party chieftain from Kano State.