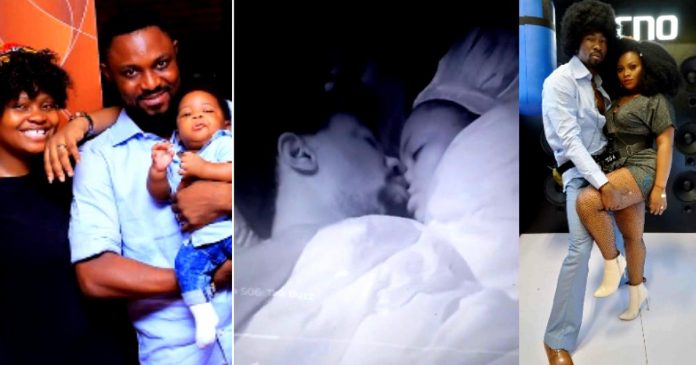 Ajebo Lawrence, husband of evicted Big Brother housemate, Tega, disclosed in a live video chat that he is not going to abandon his wife but rather give her a second chance following her apologies for her actions on the reality Tv show.

Last week, while she was still on the show, Tega set tongues wagging with a video that went viral on which featured her kissing fellow housemate, Boma while in bed.

The married mother-of-one also kissed Boma in front of the housemates and at the executive lounge where he spanked her, leading to rage from the fans.

Reacting in an interview on Monday, Lawrence said he was surprised at his wife’s behaviour on the show, saying that he can’t leave his house because of the stories on the streets.

He, however, stated that if his wife apologises, he will forgive her.

“If she comes back and apologises, I will give her a second chance; but if she comes and says what she did was okay, I will let her go and I will move on,” Lawrence noted.

Further, into the discussion, the father of one revealed that his wife, Tega, has been a very good girl and a God-fearing woman, adding that he felt that she (Tega) was cloned and the woman he saw was not the woman he married.

“Tega is a God-fearing woman. She has never for one day disobeyed me. This is a different Tega I’m seeing. I’m broken. I want that Tega I’m used to know then, not the Tega in Big Brother house.”

“I am just human. I believe we all sin and God forgives us all. I feel if I do anything funny right now, I do not know what will happen. I believe she knows she did was totally bad, but I think she needs us back more than ever,” he added.

He urged Nigerians to pray for his wife, stating that he hasn’t heard from Tega since her eviction from the Big brother house.

BBN: We Acted A Script, I Didn’t Get Down With Boma, Tega Swears