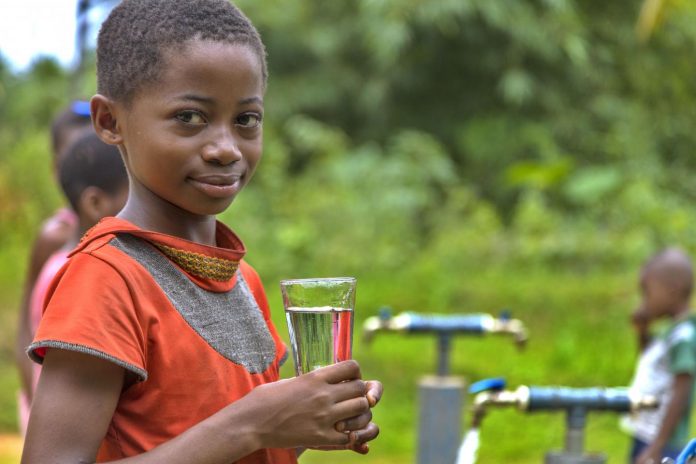 •Committed To Elimination Of Open Defecation Practice Among Households

Poor access to improved water and sanitation in Nigeria, according to the UNICEF, remains a major contributing factor to high morbidity and mortality rates among children under five. The use of contaminated drinking water and poor sanitary conditions result in increased vulnerability to water-borne diseases, including diarrhoea, which leads to deaths of more than 70,000 children under five annually.

According to the UN agency, seventy-three per cent of the diarrhoeal and enteric disease burden is associated with poor access to adequate water, sanitation and hygiene (WASH), and is disproportionately borne by poorer children. Frequent episodes of WASH related ill health in children, it said contribute to absenteeism in school, and malnutrition. Only 26.5 per cent of the population use improved drinking water sources and sanitation facilities. Also, 23.5 per cent of the population defecate in the open.

In the face of all these, experts also added that achieving the Sustainable Development Goal 6 by 2030 requires extraordinary efforts. Based on World Bank estimates, Nigeria will be required to triple its budget or at least allocate 1.7 per cent of the current Gross Domestic Product to WASH. The ambition is highest for rural sanitation where the gap for improved services is 64.1 per cent. Funding for the sub-sector is weak, and significant household contribution is needed to eliminate open defecation despite low family incomes.

The Ekiti State government is keying into the plan the administration of Kayode Fayemi is said to have taken the decision to ensure effective management and regulatory system in water supply in the state. The new agency, Ekiti State Water and Sanitation Regulatory Agency (EK-WASRA) was flagged-off at a ceremony, in Ado-Ekiti, the state capital, which had in attendance the representatives of various relevant stakeholders.
According to a statement by the Secretary of the Agency, Osalade Ayodele, an engineer, Ikun Dairy Farm Limited, Mr. Parker Waste Management Venture, Association of Water Well Drilling Rig Owners and Practitioners (AWDROP), Borehole drillers Association of Nigeria (BODA), Association of Groundwater Explorationists (AGE), Society for Waste and Sanitation (NEWSAN), Association of sachet and table water producers, National President (AWDROP) Ale Michael, Federation of Water Consumer Association and line Ministries, Departments and Agencies (MDAs) were all at the event.

Ekiti State is said to have enjoyed support on intervention in the sector from donors like World Bank, European Union, UNICEF and WaterAid. The latest supported interventions in the sector were said to have been implemented under the programmes of EU/UNICEF – Water and Sanitation Sector Reform Programme Phase Three (WSSSRP III), and Third National Urban Water Sector Reform Project (NUWSRP-3) amongst others.

“These supports midwife the upgrading of the water regulatory unit to an agency. The adoption of regulations which is the best global practice had been envisioned to lead the sector in the sustainability path by all the stakeholders present at the occasion.”

At the event, the head of water and sanitation agencies in the state and some of the invited guests presented goodwill messages and speeches. Two notable presentations made at the occasion were titled “Relevance of Regulation in Ekiti State Water Sector” and “Unveiling Ekiti State Water and Sanitation Regulatory Agency.” Bamidele Faparusi, an engineer and Commissioner for Infrastructure and Public Utilities at the occasion expressed “the necessity” to put up measures that would ensure the sustainability and protection of the huge investment by the State government and development partners.
Faparusi, who lauded the efforts of the donor agencies towards the rehabilitation of the three major dams at Ero, Egbe and Ureje under the intervention programmes, noted that commercialisation principles in the Water, Sanitation and Hygiene (WASH) services and Public Private Partnership (PPP) arrangement that can lead to sustainability has become the policy direction of the present administration.

“The coast is now clear for interested individuals, private and corporate organisations to come and invest in the water and sanitation services provision in Ekiti State. He assured that the agency EK-WASRA was out to eliminate any monopoly tendency in the sector, and protect the investments of service providers as well as give a voice to the water and sanitation service customers among others,” he stated.

Faparusi revealed that the state government is committed to sanitation governance comprising of a broad range of political, social, environment, economic and administrative systems that are in place to regulate the development and management of sanitation and the provision of sanitation services and in the elimination of open defecation practice among households and at public places in order to achieve Sustainable Development Goal (SDG 6.2) target.

The further Commissioner intimated that regulation should be seen as a part of public policies on the water supply services, as regulators constitute an essential element of good governance, as it reflects the needs of the time as well as foster a culture of adhering to standard norms and good practice that are resilient to external pressures.
“And more rational, objective and evidence- based, which enhance the implementation of the policy through a feedback control system and enshrined accountability and transparency to build confidence and trust of public, and encourage collaborative participation and interaction of stakeholders,” the Commissioner added.

He added that the agency would handle dispute resolutions and ensure prompt response to consumers’ complaints to protect their interest in addition to managing tariff, which he said would take cognisance of issues of accountability, cost recovery, return on investment, financial stability, subsidies, pro-poor, rural dwellers and other vulnerable consumers such as the aged, women and children.
Permanent Secretary in the Ministry, Olumide Ajayi in a presentation at the event canvassed the need for the agency to ensure the rights and obligations of the service providers in particular areas such as customer service standards and equally called on service providers to always ensure equitable and sustainable service delivery.

“Ekiti State Water Supply and Sanitation (WSS) reform programme started in 2010 as part of infrastructural development agenda of Fayemi administration (2010-2014) with a vision to increase access to safe water supply from 40% to 80%, and this was enhanced by the passage of the state water and sanitation policy 2012 and law of 2013 respectively thereby attracting interest of development partners to the sector and seek to collaborative partner with relevant stakeholders to achieve universal and equitable access to safe drinking water.
“Ekiti State Water and Sanitation Regulatory Agency is backed by the approved water supply, sanitation and hygiene policy in addition to the extent WASH law of the state which require good practice for policy implementation and regulation of drinking water supply and sanitation management services with rights and responsibilities of the various stakeholders—government, service providers, users and so on.

“Therefore, a regulatory authority is desirable in the water supply and sanitation sector of Ekiti State,” he said.

In his submissions, the Secretary of EK-WASRA, Ayodele gave kudos to the Fayemi-led administration for his commitment to reform in the water sector part of which was the birth of the agency, which he said will “reposition Ekiti” to the path of global best practices.

Stressing that the activities of the agency will no doubt improve the quality of service, protect the interest of the service provider, the customers, and the government. He informed that the agency has developed a strategic plan—2020-2022—which provides guidelines on activities to be implemented to ensure effectiveness.

These, he said include quality of service regulation and guidelines such as water quality monitoring, minimum service level, customer complaints, tariff-setting among others, while engagement with identified service providers and water consumers associations for the purpose of creating awareness is ongoing.

He therefore solicited the cooperation of stakeholders in the Agency’s quest to pursue its vision of setting standard for sustainable and efficient regulation, and the mission of effective monitoring of service providers and provision of customer feedback complaint platform with the guiding principles of transparency, fairness, and accessibility, among others.

As well as protecting the long-term interests of consumers with regard to price, quality and reliability of services through licensing, registration and issuance of permit among others, in carrying out its roles and responsibilities of ensuring that water, sanitation and hygiene function are properly carried out in the state.

High point of the event was the issuance of license to the first set of water and sanitation accredited service providers and the commissioning of the office accommodation of the agency, with contact at the state secretariat complex, Ado Ekiti.