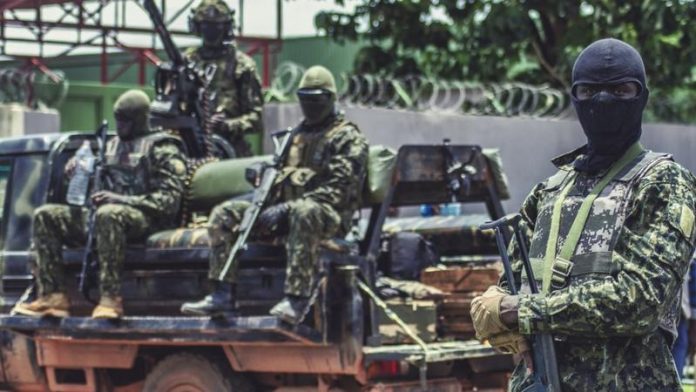 Morocco international Nayed Aguerd has explained how his team-mates were “really scared” as they heard soldiers launching a gun assault near their hotel in Guinea as Sunday’s coup unfolded.

The Atlas Lions’ squad was staying in a hotel close to the presidential palace in the Guinean capital Conakry, where they were able to hear the lengthy gunfire as a unit of elite soldiers overthrew President Alpha Condé.

“We underwent very difficult moments that we had never imagined we would experience,” Aguerd, 25, told the official website of the Moroccan FA (FMRF).

“We were really scared but security at the hotel was tight. I thank the King for everything,” the France-based defender added.

Although concrete details have yet to emerge, King Mohammed VI is understood to have played a key role in overseeing the safe release of the Moroccan delegation from Guinea.

“We left the country thanks to the King, whom I want to thank on behalf of the whole team,” coach Vahid Halilhodzic told the FMRF.

Aguerd’s fellow defender – Paris Saint-Germain star Achraf Hakimi – confirmed the tension in the Moroccan squad, who had been set to play a World Cup qualifier on Monday in Guinea prior to its cancellation.

“The situation was really hard,” he told reporters. “Players were scared as we heard gunshots outside. My clubs PSG were anxious about me and the other players, asking me what was happening in a bid to find a way to help us. We had never seen this before.”

“Thank god we have returned safely,” Ilias Chair, based in England with Queens Park Rangers, added. “I received a lot of messages when I was there, which really supported us. I would like to thank everyone.”

The squad awoke to the sound of the coup before facing a nervous wait as Moroccan authorities sought suitable guarantees that the delegation could safely leave both their hotel and Guinea.

“It was bizarre as we woke up and heard gunshots outside – we were anxious,” Halilhodzic told the FMRF.

“We didn’t know what would happen later – whether the match would be cancelled or if we would be able to go back to Morocco.”

As the evening started to fall in Conakry, the Moroccans finally got the all-clear from their embassy to leave their hotel and make the trip to the international airport.

Despite Guinea’s borders being closed that day, the plane carrying both the Moroccans and match officials was given special dispensation to leave.

As they finally secured their escape, Moroccan players sang the national anthem on the plane home as they left the tense situation on the Guinean ground far behind.

“It was a difficult situation,” said Morocco goalkeeper Yassine Bounou, who plays for Spain’s Sevilla. “I would like to thank our King who helped us and the nation for their support and concerns.”